DWEL in the TERN e-Newsletter

DWEL has recently featured in the TERN e-Newsletter. The article can be seen here:
An Echidna from Boston
Posted by Unknown at 19:44 No comments:

A new collaborative project between CSIRO and the Australian National University has launched at the National Arboretum Canberra. The project aims to use DWEL and Zebedee (a CSIRO handheld laser scanner) to monitor the growth, plant morphology, and health of some of the 94 small 'forests' that are planted in the arboretum. The arboretum is home to more than 48,000 trees including rare, endangered and symbolic trees from Australia and around the world.

Our team from CSIRO recently we visited the TERN supersite at Tumbarumba in NSW to complete two days of scanning with DWEL.
The Tumbarumba site is located in the Bago State forest in south eastern New South Wales. The forest is classified as wet sclerophyll, the dominant species is Eucalyptus delegatensis, and average tree height is 40 m. Elevation of the site is 1200 m and mean annual precipitation is 1000 mm.
The mission at Tumbarumba was to scan 9 locations with DWEL (aka Super Echidna) that have been scanned using the original Echidna in previous years gone by. We were successfully able to locate all of the original scanning locations (even in the snow) and the scans were a huge success, a sample is displayed below.
While on-site, we also established a core 1 ha for TERN Supersites, a plot that will be completely inventoried, with tree DBH's, hemispherical photography, LAI and other vegetation structural measurements paving the way for potentially of many DWEL scanning trips to come.

DWEL and VegNet in the snow 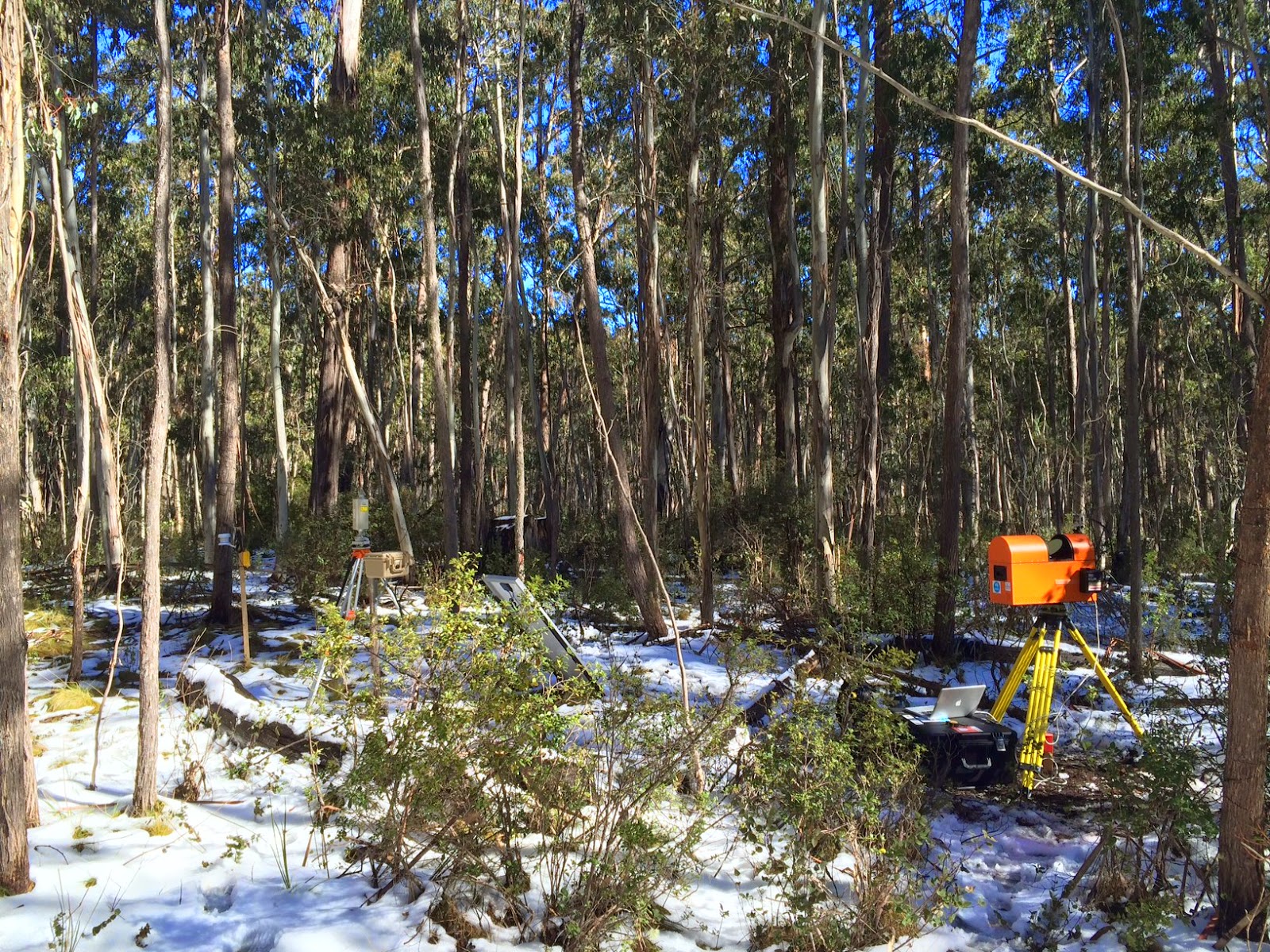 The new DWEL 'Echidna' lidar scanning the snow covered landscape at the Tumbarumba Wet Eucalypt SuperSite in NSW; and abvoe: a sample scan from the echidna at the site (images courtesy of CSIRO / TERN's AusCover, Ozflux team of Michael Schaefer, Eva VanGorsel & Guy Byrne)
Posted by Unknown at 18:43 2 comments:

Four small monitoring sites have been scanned using the DWEL at Mulligan's Flat nature reserve situated in north-eastern Gunghalin on the northern side of Canberra, adjacent to the ACT/NSW border. The four sites are the first to be scanned in Australia using the new Australian DWEL instrument. A first look at one of the scans is shown below as well as photo-panorama of the site.

mulligan's flat 2 by mickschaef13 on photosynth
Posted by Unknown at 21:24 1 comment:

DWEL to feature in 3D Film

On Thursday 5th June, DWEL will feature in a short 3D film production for the CSIRO Discovery 3D Theatre. The film is aimed at providing school children with an insight into some of the projects that are run through CSIRO, with DWEL being one of these.
The film will feature footage of the very first field scans completed by the OzDWEL in Australia, as well as a very brief overview of how DWEL works.

The wait is over. DWEL, Australia's dual wavelength echidna lidar has arrived at CSIRO in Canberra, ready to begin scanning. The project has been jointly funded by CSIRO and TERN AusCover to produce DWEL, one of only two such terrestrial lidar systems in the world. It contains two lasers of different wavelength that are used to create 3D images. The two lasers give maximum contrast between the green leaves and the woody vegetation within a scan, allowing researchers to derive information about the green and woody biomass levels of a forest.
Over the coming months CSIRO researcher Michael Schaefer and his team will be travelling around Australia with the DWEL scanning various vegetation ecosystems. 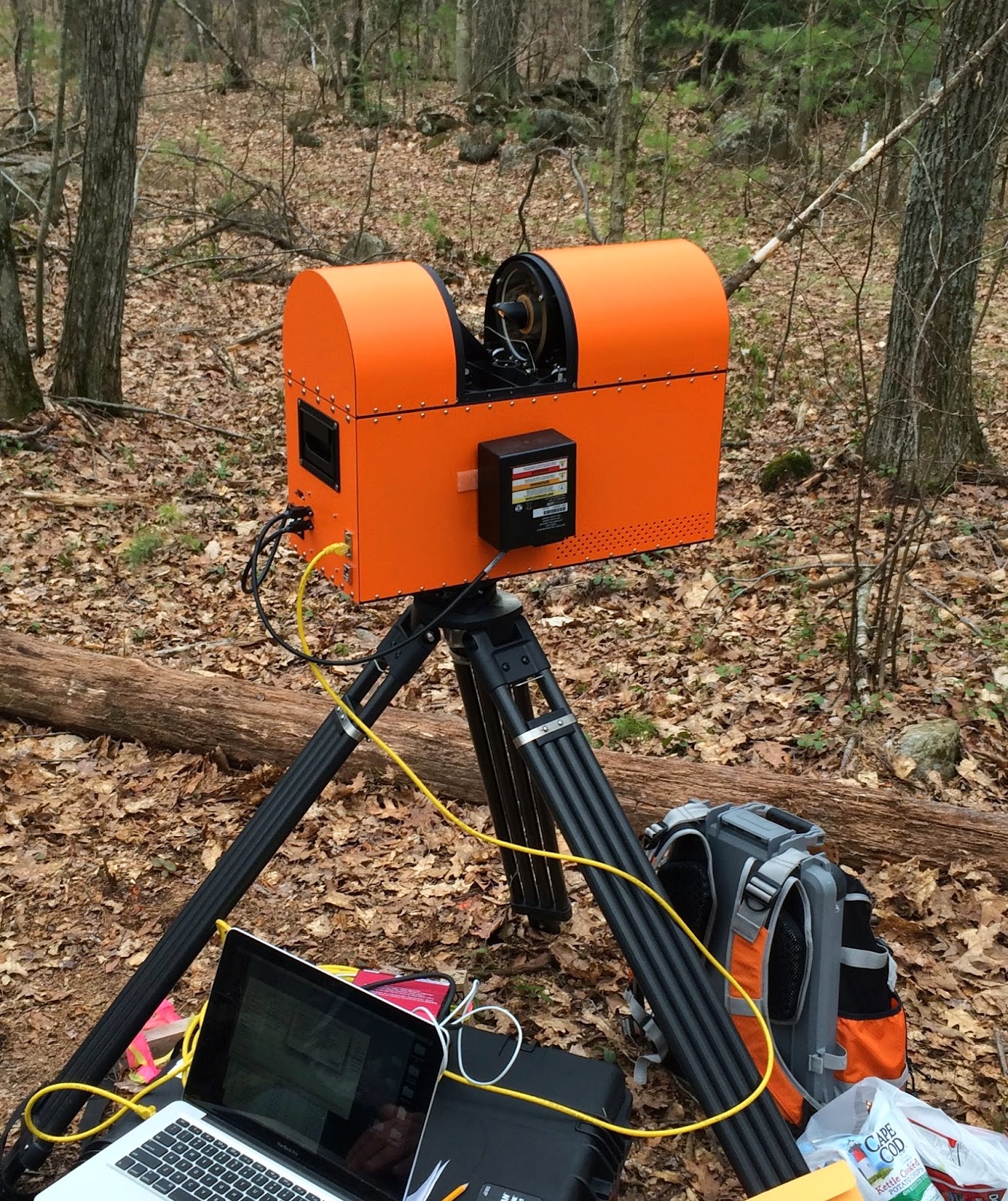